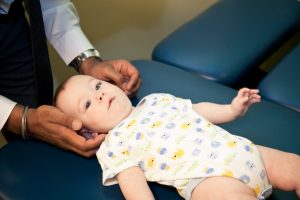 In the summer of 1989, Drs. Wendy and Juan van Breda conducted a fascinating research study. The results were published in the Journal of Chiropractic Research.

The two chiropractors surveyed 200 pediatricians and 200 chiropractors about their children. They asked how often the children had certain illnesses, if they had ever taken antibiotics, and other questions.

In four of the most significant childhood health indicators the D.C. kids did much better.

More than 95% of the chiropractic children were completely allergy free. Less than 91% of the medical children could make that boast.

With asthma, the difference between the two groups was much smaller. Still, the chiropractic children had ‘no occurrence’ answers (96% for chiropractic, 95% for medical).

With tonsillitis, the difference was startling! Nearly 43% of the medical children had tonsillitis, compared to only 26.3% of the chiropractic children.

The biggest difference showed up in cases of otitis media (inflammation of the middle ear). Medical doctors reported that eight out of every ten (80.1%) of their children had this type of ear problem when they were growing up. For chiropractors, it was only three out of every ten (31%).

What was even more interesting is that the chiropractic children didn’t take as much medication or as many antibiotics as the medical children.

The M.D.s said nearly 90% of their children had used antibiotics. Only 50% of the chiropractic children had taken these drugs.

The researchers concluded, “This study has shown that children raised under chiropractic care are less prone to infectious processes such as otitis media and tonsillitis, and that their immune systems are better able to cope with allergens such as pollen, weeds, grasses, etc., as compared to children raised under allopathic care.” With these findings, it is indeed a great idea to consider Blair chiropractic care for your children.

To schedule a consultation with Dr. Rickards, call our Escondido office at (760) 745-1511. You can also click the button below.

If you are outside of the local area, you can find an Upper Cervical Doctor near you at www.uppercervicalawareness.com.

Chiropractic is an Essential Healthcare Service during the Shelter in Place order.

To All of our Patients:

The California governor issued a Shelter in Place order recently. According to the legal order it states that visiting a health care professional is considered an essential task which means it is allowed. That being said, we want to ask that anyone exhibiting symptoms of being sick, or if you fall into the category of having a pre-existing condition that puts you at a higher risk of getting the virus to stay home until the shelter in place order is lifted. For everyone’s protection, all surfaces of the adjusting tables, graphing chair face support and handles of that chair, handrails in the adjusting room and doorknobs are being wiped down between every patient. We have the circulating fan of the heating and air conditioning unit running at all times to keep the air moving.

We have left all scheduled appointments in place. If you want to schedule or re-schedule an appointment, we do ask that you call the office so that we can know how to plan for each day.

At present, there are no drugs, natural remedies or alternative therapies that have been tested and reviewed to meet any evidence-based standard for the treatment of this virus. We do each have to seek our own pathways to health and well-being. For millions of Americans, that pathway includes regular chiropractic care. We all wish all of you the very best of health during this challenging time.

The Rickards Precision Chiropractic & Wellness website uses cookies, tracking pixels and related technologies. By continuing to browse our site, you are agreeing to our use of cookies.OkPrivacy policy
Go to Top